skip to main | skip to sidebar

Continuing with its initiative of awarding and encouraging the young achievers of this country, Amul presents "Amul Vidya Awards" for the sixth continuous year. We, at Amul, believe that the hard work that children put in their studies needs to be recognized and rewarded.

Amul started this tradition of giving Vidya Awards to the toppers of Std X and Std XII, throughout the country, during the year 2004-05. We feel proud of the fact that till last year we had awarded 85,000 students. During 2009-10 we awarded a remarkable number of 50,000 students in 78 cities across the country.

The list/photograph of winners would be uploaded on Amul's website, Facebook and Orkut pages. The winners would also be featured in India's leading newspapers and would get national recognition.
The School toppers (who had scored above 60%) in SSC (VidyaShree award) and HS (VidyaBhushan award) would be eligible for the award. For Std XII students, toppers of each stream - Science, Commerce, Humanities etc. would be awarded.

The enrollments for the year 2010-11 have been commenced. To apply please go to the respective links:
For Amul Vidya Shree Awards:
http://www.amul.com/amul_vidyashree1.html

Kindly complete online registration by 20th July 2011.
We invite you to be a part of this prestigious event, felicitating the future of India.

We wish you all the best!!
Team Amul Vidya Awards

Amul’s vision is to see an educated, talented and strong youth in a developed India of the future and thereby contribute towards nation building. We at Amul believe that the sound education of its youth is the foundation of every state. Hence it is the most basic constituent for a developing nation like ours. Towards this philosophy, Amul Vidyashree & Vidyabhushan Awards have been instituted to recognize the brilliance of the students across India as well as the quality of education & guidance imparted by the schools they study in. The inception of these awards dates back to 2004-05. Since last five years, GCMMF has recognized 35,000 merit rankers from 30 central and state education boards pan India.

· A Memento
· A Certificate of excellence
· A Gift hamper of books
· DVD: Amul India Story

In addition to the above, the list/photographs of winners would also be updated on Amul’s website www.amul.com, the winner would also be featured in India’s leading newspaper and would get national recognition.

The SSC (Vidyashree Award) & HSC (Vidyabhushan Award), school topper (must have scored above 60% aggregate mark) for the academic year 2009-10, will be eligible for the above mentioned award. In case of HSC students, school topper of each stream like Science, Commerce, Arts, etc. can enroll.

We are glad to inform you that we have initiated the enrolment for the above awards for the current year.

The Application Form and other details are available on our website www.amul.com.

To submit the online entry, you are requested to kindly visit our web-pages:

We hence invite you to be a part of this prestigious celebration and felicitation of Future India’s burgeoning talent & brilliance.

We wish you all the best!!

Both “Amul Vidyashree” & “Amul Vidyabhushan” Awards consists of:
A specially designed Trophy,
A Certificate of excellence signed by MD, GCMMF and
A Cash Award of Rs.1000/-
Display along with photograph, School, Parents & Principal’s name on our website www.amul.com
Press coverage in leading national and regional newspapers

The inception of this award dated back to the year 2004-05.
By winning this award, not only the student gets recognized, but it also help the schools to enhance their image as an academy that imparts quality education, worth emulating by others.

GCMMF takes pride in instituionalising the academic awards which are the first of its kind and rollout in such a large scale, Pan-India to felicitate future India’s burgeoning talent & brilliance.
The SSC (Class-X) & HSC (Class-XII) School Topper from Schools affiliated to any State/Central/International Board, with minimum 60% aggregate score in last academic year, could enroll for the award, online.

Once the award process is finalized, all the winners are intimated through schools and displayed on the website. The winners can see their names displayed at www.amul.com or by following the link as under;

The award winner students, their Parents and the teachers/school authorities can see for themselves featuring in Amul’s Vidyashree & Vidya Bhusan Hall of Fame and share the same among their friends, relatives and peers.

Amul has also created “Amul Education” blog on www.blogger.com and “Amul Vidya Award Winners” community on www.orkut.com to provide all winners a common platform, interactive forum to continuously stay in touch as well as to keep them informed about initiatives and activities @ amul.

All this is towards Amul’s vision to see educated, talented and strong youth to shape future India and hence work our best towards nation building.
Posted by Amul Education at 5:38 AM 20 comments:

The Awards consists of:
· A trophy
· A cash award of Rs. 1000/-
· A certificate of excellence
· The list/photographs of winners would also be updated on Amul’s website http://www.amul.com/
· The winner would also be featured in India’s leading newspaper and would get national recognition.

For those who are interested, the guidelines for filling up the on-line application form are mentioned as following;
1. Log on to http://www.amul.in/award/lists/vidyashree.php for “Amul Vidyashree Awards (10th) & on http://www.amul.in/award/lists/vidyabhushan.php for “Amul Vidyabhushan Awards (12th).
2. Fill in all the details. Please note that all the fields are mandatory.
3. The School names that we have recognized in past 2 years are already uploaded and are available in the drop down menu, after selecting the district and town.
In case you do not find your school details, we would request you to please enter the relevant details after selecting “Other” in the School Name field.
4. Please upload a passport size photograph (jpeg image file not more than 22kb in size) of the student, by selecting the upload photo button at the end of online entry form. Please name the image file by the first name of the student.
5. After submitting the entry online, please send the filled form along with the copy of the mark-sheet and a Passport size colour photo of the candidate (front-facing without any signature/stamp on the face) to the GCMMF Branch Office address displayed, after completing on-line enrolment.
Please note the Unique Registration No. generated after completion of the on-line entry and communicated to the School Principal & the student vide e-mail. Please refer/mention the unique registration id for any future communication.

The last date of enrolment is 30th Septemember 2008 and the awards shall be distributed in the respective schools before 31st Decemeber 2008, by coordinating with the school authorities.
Posted by Amul Education at 11:54 PM 1 comment:

On 1st April 2008, Orissa State Day Celebration, the Chief Minister of the Orissa state, Hon’ble Sri Naveen Pattanaik, presented the Amul Vidyashree Award to the awardees during the function organised under the aegis of State level UTKAL DIVASA SAMAROH – 2008 held at Jawahar Vidyapitha, PIPILI, Orissa in the presence of 70,000 people.

The Chief Minister expressed his pleasure and appreciated that “AMUL” (GCMMF Ltd.) is encouraging meritorious and outstanding academic performance in State / Central Board examinations through Amul Vidyashree Awards. He also expressed that this award for the young talents by “AMUL” shall definitely boost the morale of the students.

The ceremony was covered by both print and electronic media inclusing Doordarshan, ETV-Oriya and OTV news channels.
Posted by Amul Education at 5:26 AM No comments: 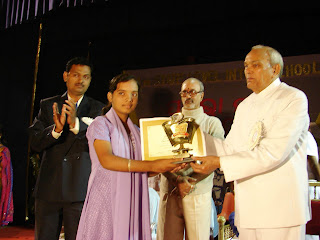 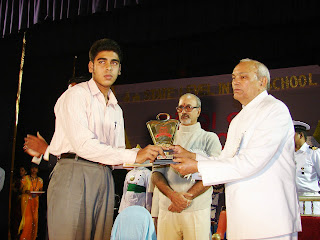 In his speech he mentioned that the appreciation and encouragement of the budding talents would lead to development of society as well as of the county.
Posted by Amul Education at 5:11 AM 2 comments:

The foundation of every state is the sound education of its youth and hence is the most basic constituent for a developing nation like India. Towards this, we at Amul have always contributed our best towards ensuring development and encouraging the spirit of enlightenment among today’s youth.

As a continuation towards this endeavour, Amul has instituted Vidyashree Award to recognize the academic excellence of the class 10 school topper in the examination in each State/Central Board enrolled school every year.

The objective of the awards is to recognize the efforts of the academic merit toppers and build equity for Amul among the young India. We are proud to constitute this award which is the first of its kind in India and operate Pan-India in such a large scale.

By winning this award, not only the student gets recognized, but it also help the schools to enhance their image as an academy that imparts quality education, putting it at par with other premier institutions in India.

· A specially designed Trophy,
· A Certificate of excellence signed by MD, GCMMF and
· A Cash Award of Rs.1000/-
· Listed along with photograph on our website www.amul.com
· Feature in press advertisement in a leading national newspaper

The inception of this award took place in the year 2004-05, whereby in the first year we honoured the award to students of 500 schools in South India, East India and Gujarat. In the second year (2005-06) we further acknowledged 2267 students across schools in India. For the academic year 2006-07, we have till date recognized the academic excellence of around 3077 for Vidyashree Award across India.

Moving ahead, in 2006-07 we have instituted the “Amul Vidyabhushan Award” to recognize the toppers of 12th Standard examinations. In the first of year of inception, we have awarded students 2073 students across India.

For the academic year 2007-08, we plan to recognize the efforts of 10,000 Class X & Class XII merit rankers (5000 students each for Vidyashree and Vidyabhushan Awards). We further intend to increase the award number every year so that maximum students are recognized for their academic excellence through our Awards.

All this is towards Amul’s vision to see educated, talented and strong youth in future India and hence work our best towards nation building.
Posted by Amul Education at 9:10 AM 11 comments: